Learn how the World Bank Group is helping countries with COVID-19 (coronavirus). Find Out

Among 186 countries sampled by the Global Indicators of Regulatory Governance, 85 prepare forward regulatory plans in the form of a list of anticipated regulatory changes intended to be adopted in the near future. Eighty-four percent of OECD high-income and Europe and Central Asian economies adhere to this good practice, followed by only about a third of countries in East Asia and the Pacific as well as Sub-Saharan Africa. Providing advance notice on regulatory changes is still relatively rare in the Middle East and North Africa region.

Worldwide, in most countries it is common for regulators to proactively engage stakeholders’ in rulemaking processes. Superficially, in 138 out of 186 studied economies ministries or regulatory agencies request comments on proposed regulations. Such consultations are commonly done through official websites, public meetings, or by reaching out directly to relevant stakeholders. However, in about a third of the 138 economies where such consultations take place, consultative practices are not adopted throughout the entire government and only some ministries consult with the public. Encouragingly, in 68 countries, consultations with stakeholders take place even though they are not required by law.

Reporting back on consultation results constitutes a good regulatory practice. Yet, not all countries that consult with stakeholders share results of such engagements. Countries across all income groups, including Czech Republic, Turkey, Tunisia, Pakistan, Senegal, Vietnam, South Africa and Tanzania, publish draft regulations and solicit feedback from stakeholders but do not report on the results of these consultations. The discrepancy between the countries that carry out consultations without reporting back on the results of the consultative processes is most pronounced in East Asia and the Pacific region, where 84 percent of economies conduct consultations but only 36 percent report back on the outcomes.

The data clearly show that stakeholder consultative processes are widespread in the developed world. And given the high internet penetration, regulators in rich countries tend to interact with stakeholders through designated unified or ministerial websites. About 76 percent of OECD high-income countries and 65 percent of Europe and Central Asian economies carry out consultations through unified websites where all ministries post their draft regulations. Conversely, low-income countries tend to use less effective methods of consultative engagements, such as public meetings or direct interactions with only a selected number of stakeholders.

Medium of consultation by region

Among all regions, South Asia, Sub-Saharan Africa and Middle East and North Africa have the least advanced consultative practices 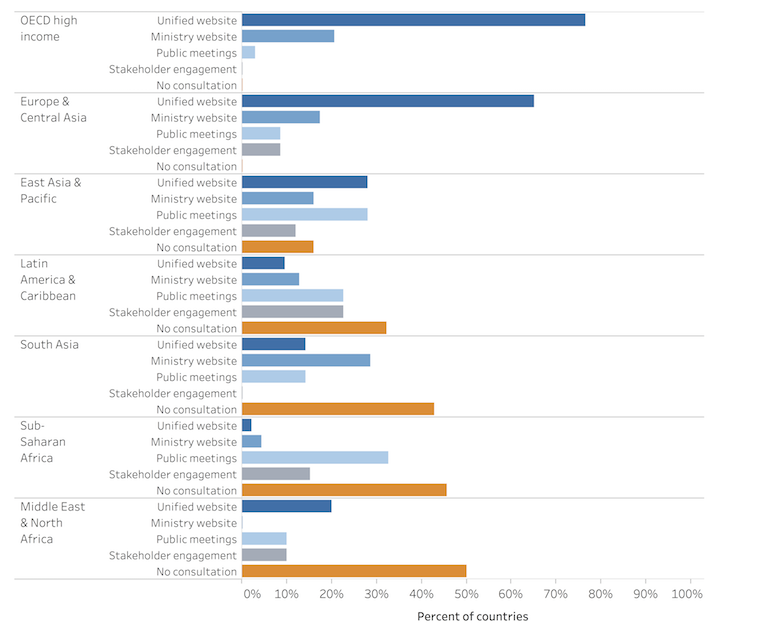 A growing number of regulators understand the benefits of conducting regulatory impact assessments (RIAs). According to GIRG’s findings, 86 out of 186 countries carry out RIAs on either regular or semi-regular basis. However, the existing RIA practices substantially vary in scope as well as in applied methodologies. The most common regulatory areas evaluated by RIAs include the general expected benefits from a proposed regulation and its specific impact on the public and private sector, while the least common ones are the potential impact on international obligations or agreements and the impact on the environment.

Less than half of countries have specific criteria used for determining which proposed regulations are subjected to an impact assessment. Japan, Bahrain and Malta use monetary thresholds, while in Greece RIAs tend to accompany drafts of major social and economic importance - the ones affecting over 40 percent of the general population or the ones that may have an economic impact on economically important sectors (i.e. tourism, maritime policy, SMEs etc.). Conversely, Moldova limits impact assessments to regulations containing norms governing entrepreneurial activity.

Out of the sample of 59 high-income countries, only 14 do not carry out RIAs: Antigua and Barbuda, Argentina, Bahamas, Brunei Darussalam, Kuwait, Oman, Palau, Qatar, San Marino, Saudi Arabia, Seychelles, St. Kitts and Nevis, Trinidad and Tobago and Uruguay. Conversely, RIAs are sparse in low- and middle-income economies. For instance, only 12 percent of low-income countries surveyed conduct some form of analysis of potential impacts of proposed regulations. In addition, in a number of countries RIAs are carried out only by individual ministries and are not practiced homogeneously across regulatory institutions. 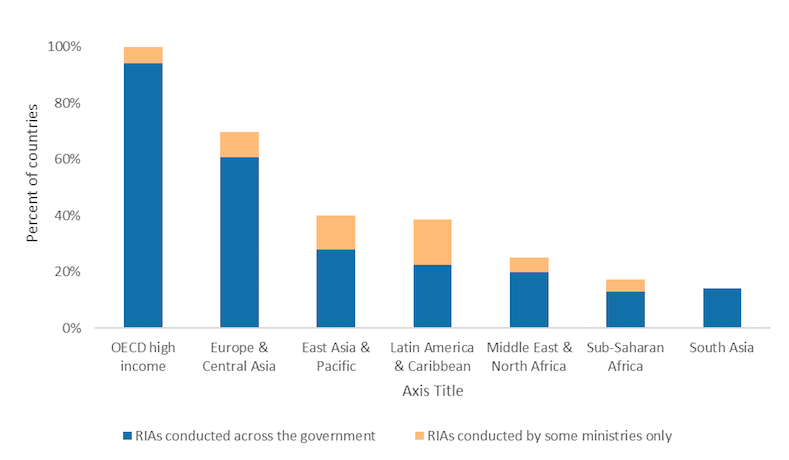 Fifty-four out of 86 countries that implement RIAs have a specialized government body tasked with conducting, reviewing and commenting on impact assessments implemented by different agencies. Such bodies exist primarily in countries where RIAs are carried out throughout the entire government. Some of these specialized oversight agencies are responsible for determining which regulatory reforms require impact assessment. However, their most common prerogative is to provide guidance to experts conducting RIAs. Overall, despite not having a legal obligation to implement RIAs, about one-third of economies (31 out of 86) do so as good practice.

Optimal decision making on regulatory matters can only be ensured when a robust and consistent RIA methodology is followed. Yet, 21 countries do not have any specific guidelines for officials completing the assessments. All OECD high-income countries with the exception of Italy and Chile have specific RIA guidelines, compared to only three economies in Sub-Saharan Africa (Uganda, South Africa and Kenya).

This year GIRG presents new data on the practice of reviewing regulations after their enactment. Ex-post reviews ensure that regulations remain up to date, are cost effective and continue to deliver desired policy outcomes. This practice is most prevalent in OECD high-income countries. Surprisingly, in Europe and Central Asia only 6 out of 21 economies surveyed conduct ex-post reviews. And only a handful of low-income countries, including Afghanistan, Nepal and Uganda, conduct such reviews.

Implementation of ex-post reviews across regions

Note: these data have been collected from 132 countries

Globally, there is a wide range of ex-post review processes and methods. Most countries in the Middle East and North Africa as well as South Asia regions conduct ex-post reviews on an ad hoc basis. On the contrary, OECD high-income, Europe and Central Asian and Latin America and the Caribbean countries use more diverse approaches, such as stock-flow linkage rules or statutory sunset clauses. 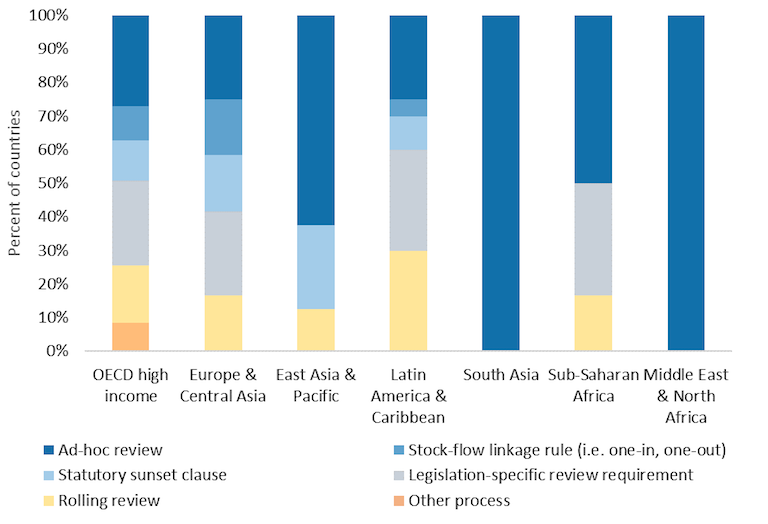 Worldwide, most countries have systems in place that allow easy access to regulations either online or in print. In the majority of high-income economies all the existing regulations are available through designated websites and can be accessed free of charge. Low-income countries, however, still tend to use journals and/or official gazettes to compile and publish regulations. Out of 186 countries covered by GIRG, 31 do not make their current regulations publicly available in a single place, including high-income economies, such as Qatar and Saudi Arabia.

In general, inclusive rulemaking processes are prominent in the developed world and sorely lack among developing countries. Yet, while low-income economies tend to be less transparent, it is possible to have a high degree of transparency at all income levels. For example, based on the overall regulatory governance score, several lower-middle-income countries perform above the 3.48 average score of the high-income economies. On the opposite end, there are three high-income economies with a regulatory governance score of zero. 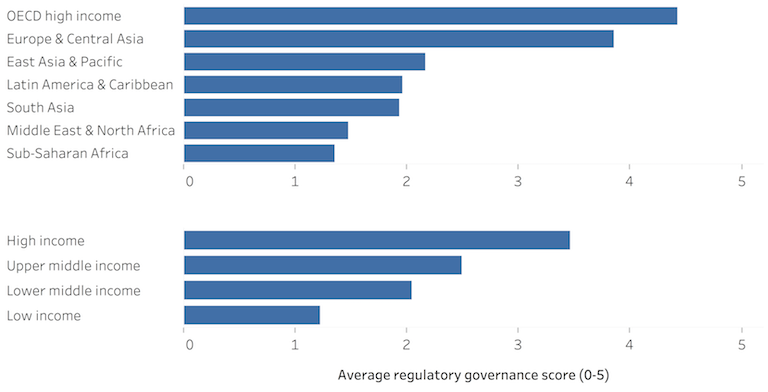 Eleven OECD high-income and three Europe and Central Asian countries receive the maximum possible score of 5 on inclusive, effective and transparent rulemaking. There is a clear correlation between economies’ income levels and regulatory quality scores, while country-specific practices vary within and across regions. Among low-income countries Uganda receives the highest scores of 3.25 and among lower-middle-income ones Kosovo and Moldova score 4.75 each, demonstrating that despite the robust relationship between income and regulatory quality, poorer countries can excel at adopting and following good rulemaking processes.

We welcome your feedback. If you feel that the data presented here does not reflect the current practices in your country,